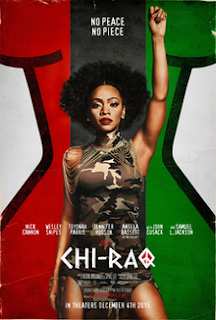 Was reminded to watch this by a sort of Cusack reference in the new Lego Batman film (yes, really, if you've seen it you'll know that a few of his rom coms get a shout out!).

The central premise of the film is that the women of Chicago (the Chi-raq of the title, so named because more people were killed there due to gun and gang violence than soldiers in Iraq) unite to deny their men folk sex until they stop the killing. Or as they say..

Cusack plays a neighbourhood priest who gets to deliver a barnstorming sermon railing against gun violence at the funeral of a small child caught in the cross fire. 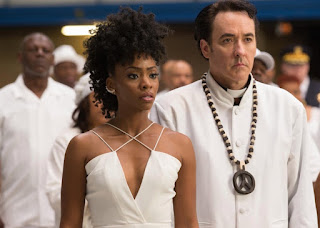 I enjoyed the plot, style and soundtrack - and was engaged from the start with characters largely speaking in rhyming couplets.However it was hard to stick with for 2 hours and my attention did start to drift - but great to see Cusack in something so interesting compared to another rubbish action film.

Posted by Unknown at 6:05 pm No comments: 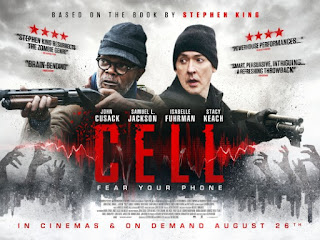 Tagline: When everyone is connected no one is safe
Cusack plays: Comic Book Artist Clay Riddell

Technically, messing a little with the IMDB order of things here - I'm skipping over Hot Tub Time Machine 2 - the version I watched last year didn't feature Cusack (and it was AWFUL), but he appears uncredited in the unrated version for a few seconds - watch here)

I'll also come back to Chi-Raq which is next listed, and skipping on to Cell, which I watched with a (thankfully) free Amazon credit.

After 2007's 1408 Samuel L Jackson and Cusack reunite for another Stephen King adaptation. In this, a weird signal suddenly pulses through everyone's mobile, or Cell, phone, turning them into mad zombie types, bashing each other over the head, planes falling out of the sky etc. Those lucky enough not to have their phone pressed to their ear quickly scarper and band together to fight the evil. 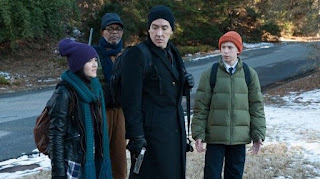 The start of this is very fast paced, we quickly establish Cusack's situation, living away from his wife and child for a while and at the airport, thinking of heading home to them when the evil Cell signal strikes. Everyone very quickly accepts the situation, rather than running around trying to work out what happened. The rest of the film is given over to grouping together and attempting to fight the evil, with a weirdo apparition turning up in their dreams etc. 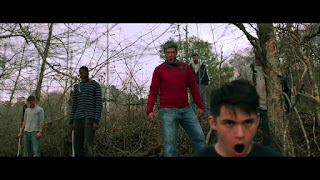 I can barely be bothered writing anymore about this  - it is terrible FULL STOP. Interesting enough premise, but I'm not really a fan of crazy zombie type stuff, and no character is interesting or sympathetic enough to invest in. AVOID.

Posted by Unknown at 5:04 pm No comments: 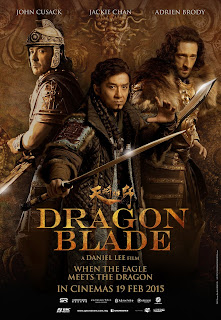 I was pleased to see this pop up on Netflix recently as I'm not sure that it got an UK cinema release, or if it did, it was very limited. It was also a pleasant distraction and reason for a break from essay writing. Had Cusack not featured this isn't something that would have particularly appealed to me, but I queued it up, poured a drink and got ready to experience Dragon Blade.

The plot sees a Chinese Silk Road protection squad (led by Jackie Chan) encounter a roman legion (headed by Cusack). Initially they square off, but then decide to work together to protect the Silk Road from the nasty Roman Tiberious (Adrien Brody, manically chewing the scenery). Various fights and buddy bonding moments ensue.

This is a mixed bag. It was primarily made for a non-Western audience, only half of it is in English, and I couldn't manage to turn the subtitles off for these parts, which only made the wooden script more obvious. It's also ridiculously obvious it's on a set rather than location. On the other hand, the action scenes (directed by Chan) are pretty decent.

We first encounter Cusack riding in, in slow motion, and he's pretty good. Great to see him not playing a vaping baddie for once! He and Chan develop quite the bromance and he's looking pretty good.

If you can stand a child actor singing like a little cherub, you might want to give this a go. It's fairly forgettable, but probably worth a watch. I haven't a clue how historically accurate it is!

Posted by Unknown at 7:44 pm No comments:

I'm calling the movie poster as a little misleading, as at no point are there ever any helicopters hovering over a lit up city...

Rounding off the year by getting up to date with the Cusack challenge and this little action number, which is a step up from my last watch, The Prince.  The blurb for this one is that a couple head to Puerto Rico to adopt a little girl, who has been orphaned as a result of the earthquake in Haiti. They have a jolly holiday on the beach as they wait for their ADORABLE (honestly, I lost track of how many times she was described as adorable) little girl's passport to be processed. They bump into Cusack, apparently holidaying at their result (LOOK OUT HE'S VAPING/SMOKING A GIANT CIGAR) and after the husband (Ryan Phillipe) has a bust up in a bar, the adorbs wee gal goes missing.

As can be ascertained by the trailer, they have fallen victim to a 'reclaim' scam, where the fake adoption agency has taken the child and loads of their money. They really should have guessed, as Jacki Weaver as the adoption agency lady just screams dodgy to me. The story continues by adding another layer, bringing in the couples past etc, with Cusack's role as chief baddie increasing. I am starting to wonder if he is playing the bad guy so he gets to smoke. Or maybe it's just more fun.

So, this isn't a great film, but its alright and  probably worth a watch. Towards the most dramatic parts I even stopped playing Candy Crush/eating Quality Street and gave it my full attention. So y'know, reasonable praise.

Here's a trailer that basically shows you the entire film if you don't have a spare 90 minutes.

Posted by Unknown at 9:29 pm No comments:

Tagline: Mercy is for the weak
Cusack plays: Sam

Another release which bypassed a cinema release and headed straight to DVD/Netflix/Amazon Prime et al.  Of the 3 men on the poster, Willis and Cusack have really small parts, and only show up 34 and 50 mins into the 90 minute feature. So Jason Patric is the 'star' of this run around, shoot at things, emote, repent barrel of fun.

The film begins with a flashback to crime lord Bruce Willis (seemingly sporting a CGI beard and/or face) seeing his wife and child get blown up in a car.  20 years or so later, mechanic Jason Patric is chatting with his college aged daughter on Skype. She then disappears, and he has to go investigate what has happened to her, aided by his daughter's sexy friend.

*MILD SPOILERS INCASE YOU WANT TO WATCH THIS RUBBISH* So we find out that Jason Patric was the one who killed Willis' family - but he's not a total bad guy, he was only planning to blow up Willis. So I assumed that Willis has kidnapped his daughter as revenge, but this was not the case, so not as predictable as it could have been. Instead shes been 'kidnapped' by Drug dealer 'The Pharmacy' played by 50 Cent. In coming to look for her he reappears on Willis' radar, he gets interested in going after the daughter and ALL THE GUNS come out.

Cusack wanders in at the 50 minute mark, as Patric's old friend (?) who he entrusts with looking after his daughters friend while he goes off to the gun shop etc. Cusack is in serious whisper mode, mumbling something about Hadrian's Wall and why Patric is known as 'The Prince'. Later he shoots some guns and lights up a giant cigar for no reason (cooler looking than the vaping of previous films).

This is just a bad film, full stop. There is nothing and no one to care about, no story to get invested in, and the only mild amusement I found was in them naming a drug dealer 'The Pharmacy', and that the missing daughter was called Beth Brennan - the name of the character Natalie Imbruglia played in Neighbours in the early 1990s. (If only I could empty my mind of useless facts like this, I could take over the world).

Posted by Unknown at 3:28 pm No comments: 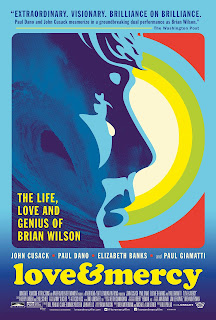 After the last two straight to DVD duds, I was cheered by the prospect of an actual UK cinema release and trip to see Cusack on the big screen. The trailer looked promising, and the subject matter of interest. I like a biopic, I like the Beach Boys, fingers crossed I was in for a treat.

And *happy dance* this is a great film. It cuts between 1960s Brian Wilson (Paul Dano) and 1980s (Cusack). The earlier years focus on the Beach Boys successes, Wilson's musical genius and the recording of Pet Sounds and other records. It also documents his emerging mental health problems and troubled relationship with his father. The film continually cuts between the early years and a few decades later - Wilson is under the control of a shady therapist (Paul Giamatti) who keeps him heavily medicated. He meets Melinda (Elizabeth Banks), when out buying a car, and she attempts to pry him away from the Dr's grip. 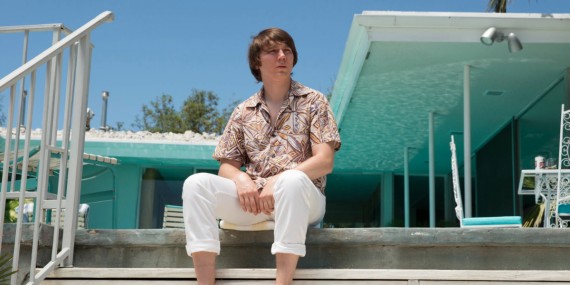 Dano is fantastic as earlier Brian, embodying the star and even doing some singing. You grin as the familiar songs start to take shape, even if sometimes it's a bit obvious and bordering on cheesy (no prizes for guessing which song emerges after a character mentions animals and moods being affecting by vibrations). I think that's one of the joys of biopics though. 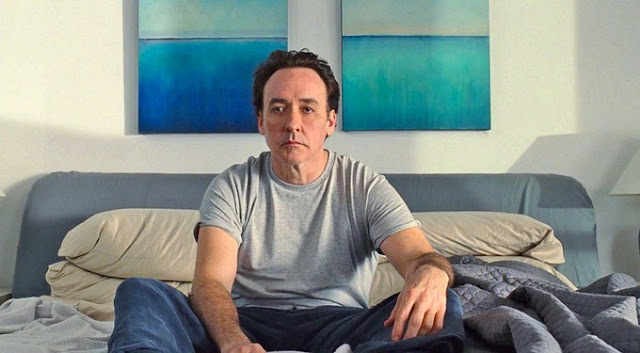 Alas Cusack doesn't sing, but he wonderfully portrays Wilson's struggles, paranoia and empty, controlled life. I knew less about this period of Wilson's life, and while Giamatti verges on the panto villian, he's pretty scary. You are truly rooting for Melinda to come through and rescue Brian and release his muscial genius once more. And you just want to give Cusack a big hug.

So it's a thumbs up for this one from me.

Posted by Unknown at 8:23 pm No comments:

Tagline: The cat's in the bag
Cusack plays: Jack.

I think the fact that I watched this about a month ago but have only just mustered up the energy to post a review probably tells you all you need to know. This is another straight to DVD number, focused around Cusack, Bobby De Niro and some wifey.   It's quite dark and whispery, which combined with my tendency to multi task and not concentrate on films meant some rewinding was required.

So, big Bad Bobby De Niro pays his shady hit man type Cusack some moneys for a simple job - retrieve a bag and bring it to him, the one very important condition being DON'T LOOK IN THE BAG. This is the one thing going for this film and keeping you interested -what's in the bag???? (you know it's not going to be anything good). Along the way people start trying to kill each other and a sexy laydee turns up to try and disrupt things. Oh, also the midget janitor from Scrubs and a guy with a blingin eye patch.

I was entertained a little by some links to other Cusack flicks - Crispin Glover as a creepy hotel employee (as seen in Hot Tub Time Machine) and running about around a motel was a bit Identity like.

So overall, this is another fail, but I am a little cheered by the trailers for upcoming Cusack flicks, Love & Mercy and Dragonblade which both look worth a watch. Also, happy 49th birthday tomorrow Mr Cusack!

Posted by Unknown at 9:11 pm No comments: